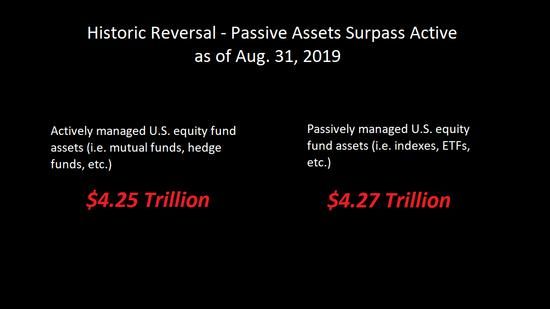 The S&P 500 returned an astonishing 31.49%% during 2019, which marked its best performance since 2013. Meanwhile, the HFRI Fund Weighted Composite Index returned 10.4%, its highest since 2009. The long bull market has made it more profitable for most investors to keep their money in passive market indexes than in actively managed funds, and for the fifth year in a row, the hedge fund industry has seen more closings than openings. As of Aug. 31, 2019, passively managed U.S. equity funds had $4.27 trillion in assets under management, surpassing the $4.25 million held in actively managed funds.

During this profitable year for the overall U.S. stock market, here is a review of the investing strategies that produced the best results in both actively managed funds and passive indexes.

Wedgewood Partners’ Focused Large Cap Growth Fund, which is dedicated to large-cap growth stocks, did well, outperforming the S&P 500 slightly with a return of 31.96% for the year. Brown Advisory’s Growth Equity Fund returned approximately 40%, with a five-year average annual return of 14.23%. Ensemble Capital Management’s Ensemble Fund also returned an estimated 40% for the year.

Aside from the most famous investing strategies, some alternative approaches achieved good results for 2019, though there is not enough data to suggest whether such numbers would be repeatable on a larger scale.

Bill Ackman (Trades, Portfolio)’s Pershing Square delivered 58% returns in 2019 after three years of negative returns, which he partially attributes to things he’s learned from Warren Buffett (Trades, Portfolio). “I think what Mr. Buffett realized in 1969 is that being a long-term investor with short-dated capital is just ultimately going to lead to a bad outcome at some point in time,” the hedge fund manager said in a recent interview. Ackman follows an activist investing strategy, which focuses on accumulating large holdings in a small number of businesses and using that leverage to influence those companies to create value for shareholders.

Meanwhile, Chuck Akre (Trades, Portfolio)’s Akre Focus Fund returned 35.03%. Akre’s investing strategy centers around business with a higher-than-average rate of return on capital, a below-average level of risk, an attractive valuation and strong management, a strategy that some may consider a different kind of value investing.

What happened to value?

As an investing strategy, fundamental value has come under fire in recent years due to the underperformance of big-name value investors who gained their fame after the 2008 financial crisis. For example, David Einhorn (Trades, Portfolio), famous for his Lehman Brothers short, returned 14% in 2019 after posting a 34% loss in 2018. Even Buffett’s Berkshire Hathaway (BRK.A)(BRK.B) ended the year up 11%, marking the conglomerate’s worst performance since 2009. With popular value investors failing to beat the broader market index, investors are beginning to ask if value investing is dead.

However, that may not be the case. The HRFI Fundamental Value Index was up 16.4% for the year versus the broader HFRI Fund Weighted Composite Index’s increase of 10.4%. Value investor Bill Nygren (Trades, Portfolio) posted a 27% gain for the year. Even if that underperforms popular indexes, it is far from insignificant. The HFRI numbers suggest that, while certain growth stocks drove growth returns higher, value returns were more stable and consistent for actively managed hedge funds in 2019.

From a certain viewpoint, then, you could say that value strategies tended to outperform in terms of consistency across the sector and possibly taking fewer risks. Value investing isn’t dead – it just isn’t capable of finding ways to produce the highest profits at the height of a bull market, as evidenced by Buffett’s struggle to deploy his company’s $128 billion cash pile.

Overall, growth strategies and passive indexes took the cake for 2019 in terms of the highest returns for the year, while value strategies and actively managed funds lagged behind.

The success in growth stocks was largely thanks to large-cap popular growth stocks as well as successful bets on lesser known small-cap growers in the tech sector. As long as the current bull market continues without the U.S. economy suffering a major correction, and as long as the tech sector doesn’t encounter any major roadblocks and can continue growing it sales, it seems possible that this trend may continue into 2020 (though no one can predict what Mr. Market will do).

Disclosure: Author owns no shares in any of the stocks mentioned.

Not a Premium Member of GuruFocus? Sign up for a free 7-day trial here

This article first appeared on GuruFocus.

Google’s first true wireless earbuds could arrive soon – but can they rival the AirPods?