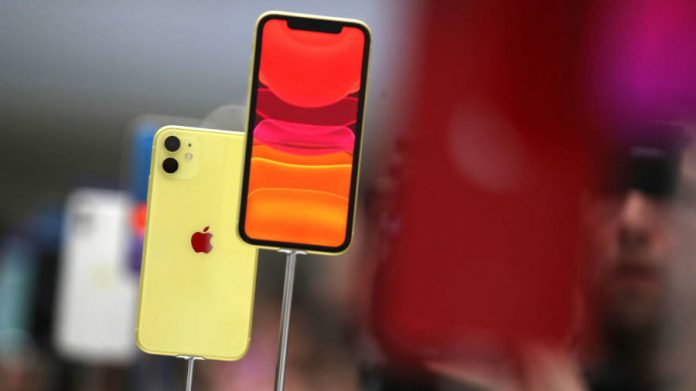 Apple has piled on more than $400bn of market capitalisation so far this year, even as its profit margins fade and its new iPhone failed to wow analysts.

The share price of the tech company closed on Friday at a record high, up 65 per cent so far this year, its best run for a decade and almost three times the gain for the benchmark S&P 500.

The increase in its equity value since January comes to $407bn: almost as much as the entire market capitalisation of JPMorgan Chase, America’s biggest bank by assets. The higher price nudges Apple ahead of Microsoft — which itself is up 44 per cent — to regain the title of the world’s most valuable listed company, worth $1.16tn.

“People are looking for certainty in an uncertain market,” said Michael Kagan, a portfolio manager with ClearBridge Investments in New York, which owns the stock. “Investors love that Apple generates so much cash flow — it’s a cash machine even though it’s a relatively mature business.”

The gains are all the more striking because 2019 is likely to be a undistinguished year in the history of Apple product launches and financial results.

While the iPhone 11 received positive reviews it was widely considered a phone that caught up with the competition rather than led the field. By contrast, in 2009 — when Apple’s share price climbed 147 per cent — the global economy was rebounding from the financial crisis and the iPhone was rapidly entering the mainstream.

This year’s rise has been flattered by a dip in Apple shares at the end of last year, amid a broader market sell-off and tensions between the US and China. Apple’s share price plunged 31 per cent between October and the end of 2018, after the company warned its sales in China would be lower than anticipated.

Both earnings and revenues fell this year. In the 12 months to September, Apple’s operating earnings declined 10 per cent to $63.9bn, and they remain considerably lower than the record $71.2bn the company earned in 2015. Revenues are up 15 per cent since 2015, but this year they fell 2 per cent, to $260bn, as iPhone sales dropped.

But investors pointed to the company’s share buybacks, its services revenues and the anticipated success of 5G as reasons for optimism.

Apple has spent $320bn buying its own stock over the past decade, the largest sum of any company in the S&P 500. Microsoft, in second place, has spent $116bn. “It’s not even close,” said Howard Silverblatt, senior index analyst for S&P Dow Jones Indices. “They are the new poster child of buybacks.”

Cash and short-term securities on Apple’s balance sheet topped $100bn at the end of September.

Apple is also now achieving the kind of sticky, recurring revenues that investors tend to prefer, as the company relies less on sales of hardware. Its services arm saw revenues of $46bn in the year to September, up from $20bn in 2015. The company also this month unveiled a subscription streaming TV service to compete with Netflix and HBO.

“The market puts a premium on software over hardware,” said Pelham Smithers, an independent analyst. “Software is less cyclical, enjoys higher margins and is easier to protect.”

Despite the outperformance, finance chief Luca Maestri said Apple still trades on a cheap valuation compared to peers and he feels “very good” about overall profitability and momentum in services and wearables. Apple is trading at a multiple of 20 times its previous 12 months’ earnings, a discount to the S&P tech sector at 24 times.

Wall Street analysts are also bullish, on the whole. Of 41 analysts polled by Marketwatch, 19 rate the stock a “buy” and just five have a “sell” rating.

Analysts at Bank of America say there is “significant” potential in the stock. They expect “relative outperformance” heading into the next iPhone cycle when Apple is widely expected to launch its first 5G smartphone.

In this wild stock market, some investors favor Tesla and Virgin Galactic over Apple and Amazon

Apple could tap Luxshare for older iPhone model production in 2021