Talk about a bitcoin bull case.

The digital currency is headed to new record highs, says Tom Lee, co-founder, managing director and head of research at Fundstrat Global Advisors — but there’s a catch some cryptocurrency investors may not be expecting.

“Bitcoin has kind of stalled recently because the macro outlook has stalled. I think, in a world without trend, bitcoin doesn’t go up,” Lee said Thursday on CNBC’s “Fast Money.” “The next big catalyst, I think, is a decisive breakout in the equity markets, because I think once equities break to an all-time high, bitcoin becomes a risk-on asset.”

In other words, according to Lee, as stocks go, so goes bitcoin — at least for now.

With Lee expecting the S&P 500 to climb to 3,125 or higher by year-end, that could mean a major rally is in the cards for the increasingly volatile digital currency. Bitcoin reached an all-time high of $20,089 in late 2017, according to CoinBase.

“[The S&P’s] all-time high is around 3,025,” which it reached earlier this year, Lee said. “I think we’re going to surpass that soon and it would be bullish for bitcoin.”

Lee’s theory is built in part on the historical ties between bitcoin and the equity markets. In the 10 years since bitcoin’s launch, the best years for the S&P have coincided with best years for bitcoin, he said. 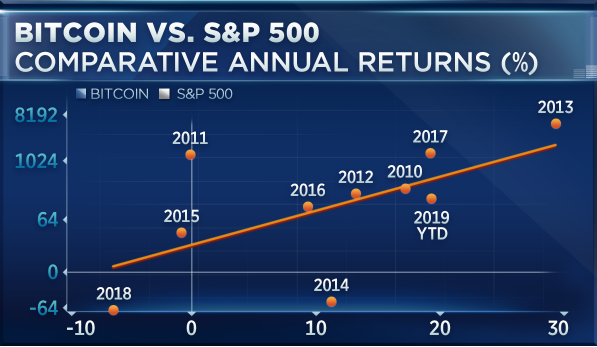 “Bitcoin does best when the S&P’s up more than 15%,” Lee said Thursday. “Bitcoin may be ambidextrous [in] that it works well in a risk-on world, but as you start to get nervous, then you treat it like digital gold.”

The last several months have brought about “neither environment,” leaving bitcoin’s fate in the hands of uncertain investors, the strategist said.

“It was a market that looked like it was on the precipice, it looked like it could fall, but it never did, and I think [being] stuck in that trend was bad for bitcoin,” he said.

But before all this occurs, BKCM founder and CEO Brian Kelly expects investors to get a once-in-a-generation chance to buy the popular cryptocurrency, he said in the same “Fast Money” segment.

Bitcoin fell by nearly 2% on Friday to just above $10,210, according to CoinBase.

Bitcoin, Gold are Not Rising Because of Major Market Manipulation

Bitcoin Must Break $9,100 To Avoid A Major Downtrend: Here’s Why