Below you can see a snapshot of the heat map of the top ten crypto assets. An interactive version is available at bitgur.com. 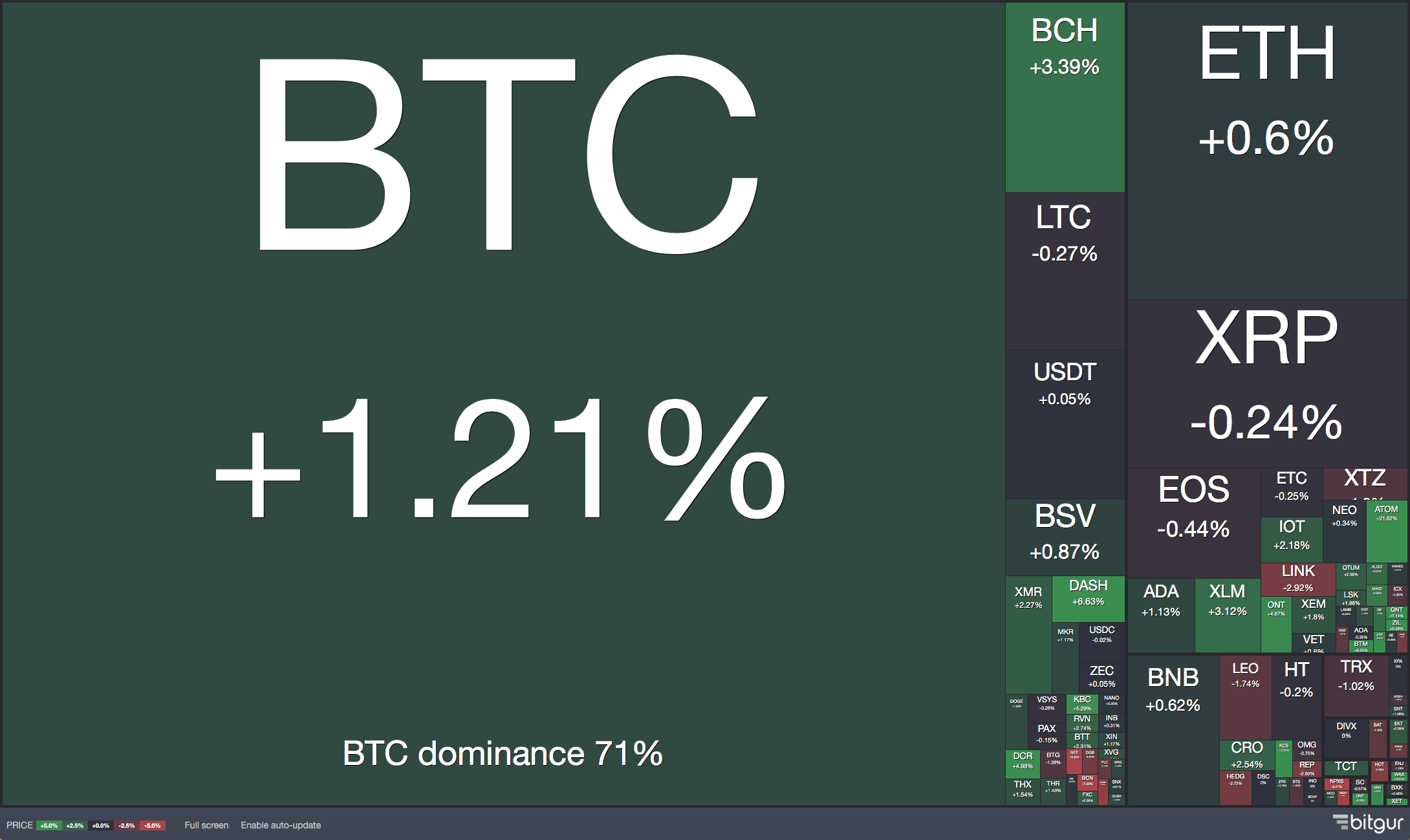 On the news front, after yesterday’s statements against Libra, Bruno Le Maire, French Minister for Economy and Finance, said today it is in favour of a ‘public digital currency” and calls for cryptocurrency rules at the EU level. In another piece of news, we read that cybercriminals are selling fiat cash for bitcoin from their hacked operations for fractions of its value. We also read that the Australian Securities and Investments Commission (ASIC) projects a rapid growth od the cryptocurrency markets. ASIC is working with international regulators on taxation and anti-money laundering issues. Finally, it is to note that Facebook’s Libra Association head, Bertrand Perez, tells that the Libra token will be launching in the second half od 2020. 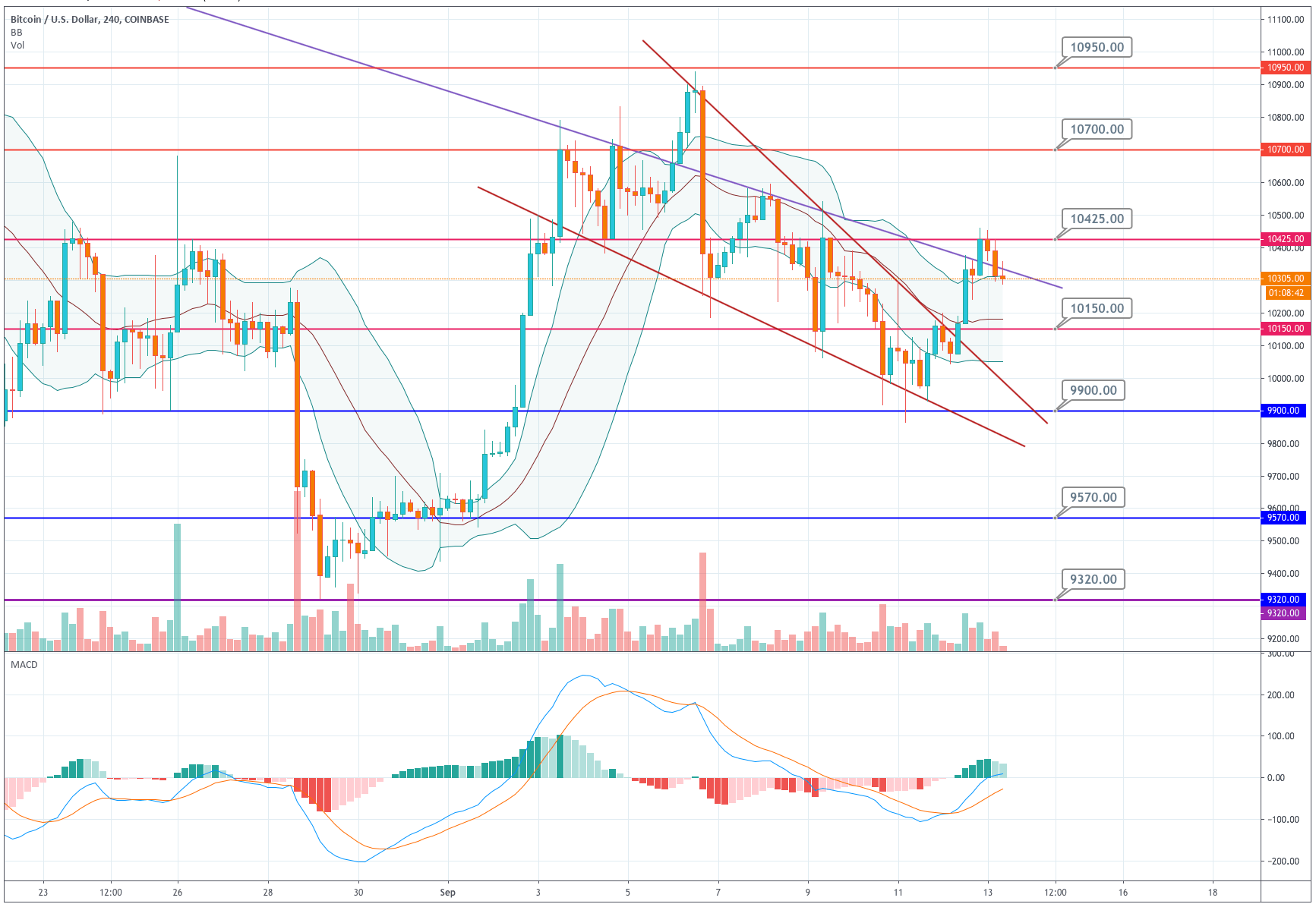 Bitcoin broke its resistance line of $10,150 and headed until it was rejected at our projected key level ($10,425). On the 4H chart, The price broke the descending wedge and went to challenge the descending trendline (purple). BTC price is now moving above the +1 Bollinger line, and the band is turning upwards, while the MACD has shifted to bullish. Therefore we see more potential for upward movements. Our key levels from Thursday’s update are still valid. We can see that the mid-line of the Bollinger band move close to $10,150, so this is a crucial level to hold. If the price bounces convincingly near or above that level, it is a new sign this upward impulse is not another bull trap. 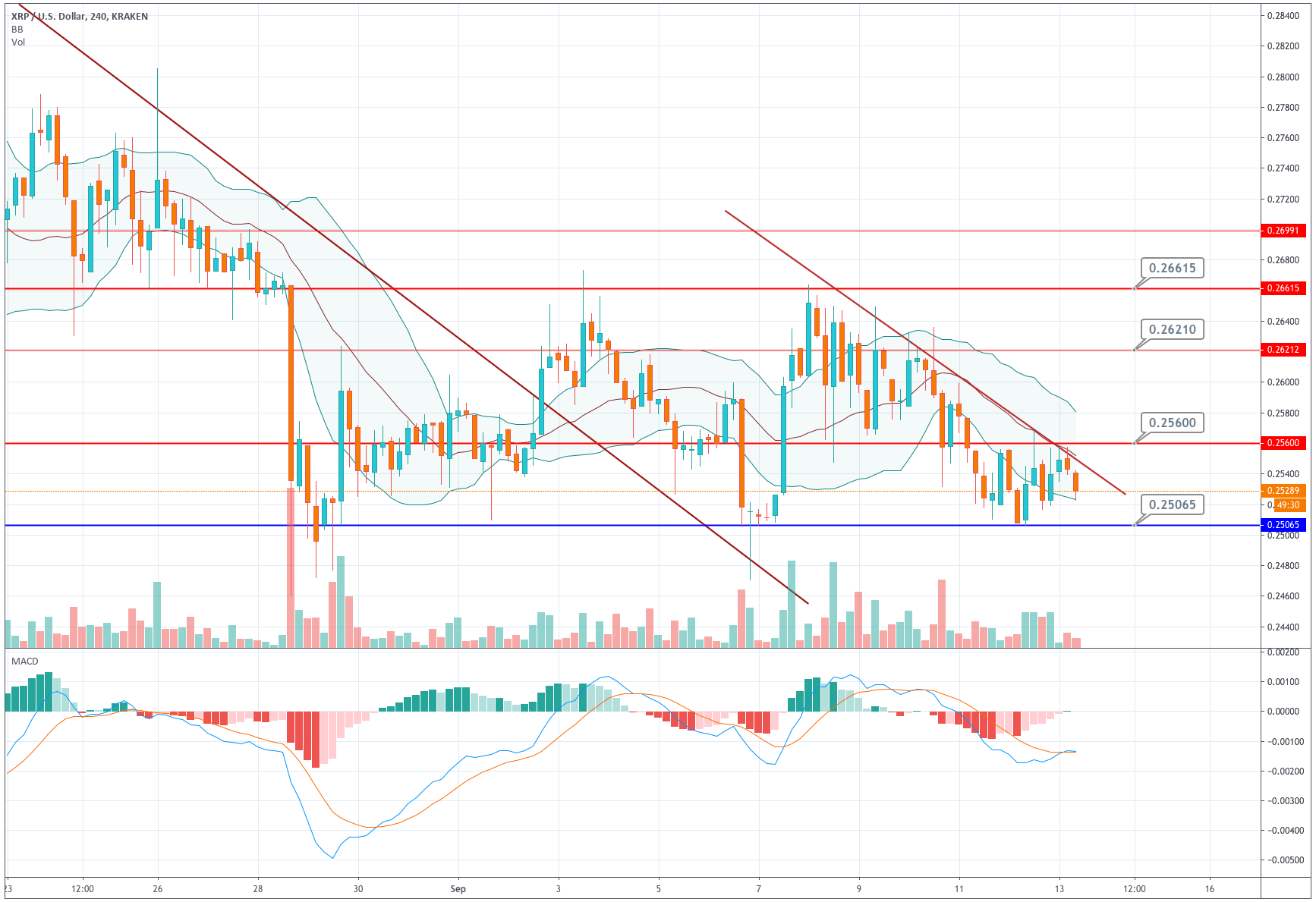 Ripple got trapped in the range between 0.25 and 0.256. Yesterday, XRP had a slight impulse helped by BTC ascent, but it had not enough buying interest to move the price above the 0.256 level. On the 4H chart, we see that the price touched the mid-line of the Bollinger band and returned toward the -1 line. That fact is creating a lower high. Also, MACD is making a crossover to the downside. Therefore, we have three indications that the sellers continue dominating this token. O.25065 is essential to keep holding the price in this sideways range. 0.256 is the level to break for buyers start believing in a recovery. 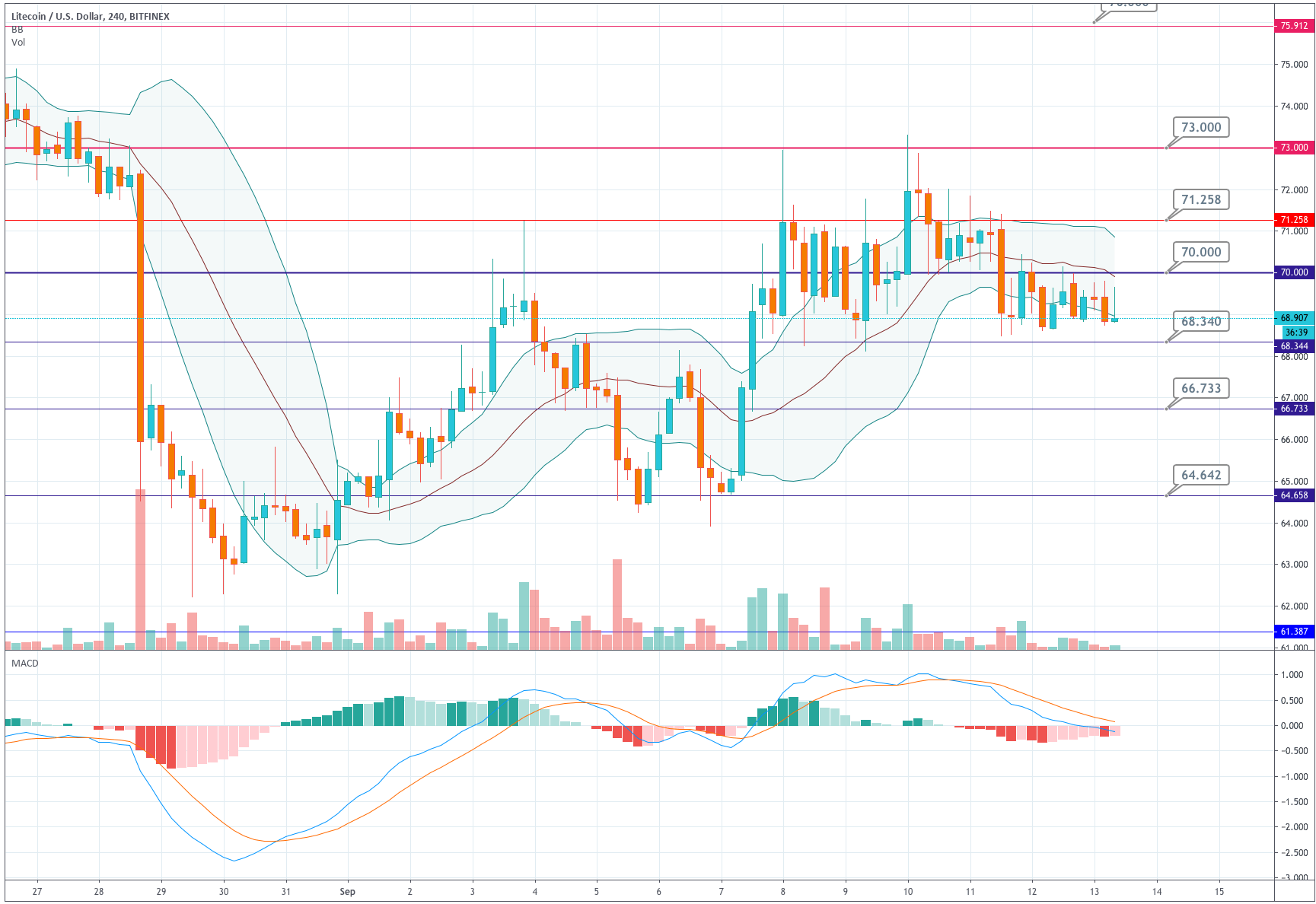 Litecoin price failed to cross the $70 key level yesterday, even when Bitcoin was getting moved up. Today is slightly weak but still inside the range between $68.34 and $70. On the technical level, the price moves below the -1-line of its Bollinger band and MACD continues being negative. That means we have to keep avoiding its purchase because the risk of more downside is high. The current key levels shown are similar to yesterday’s. 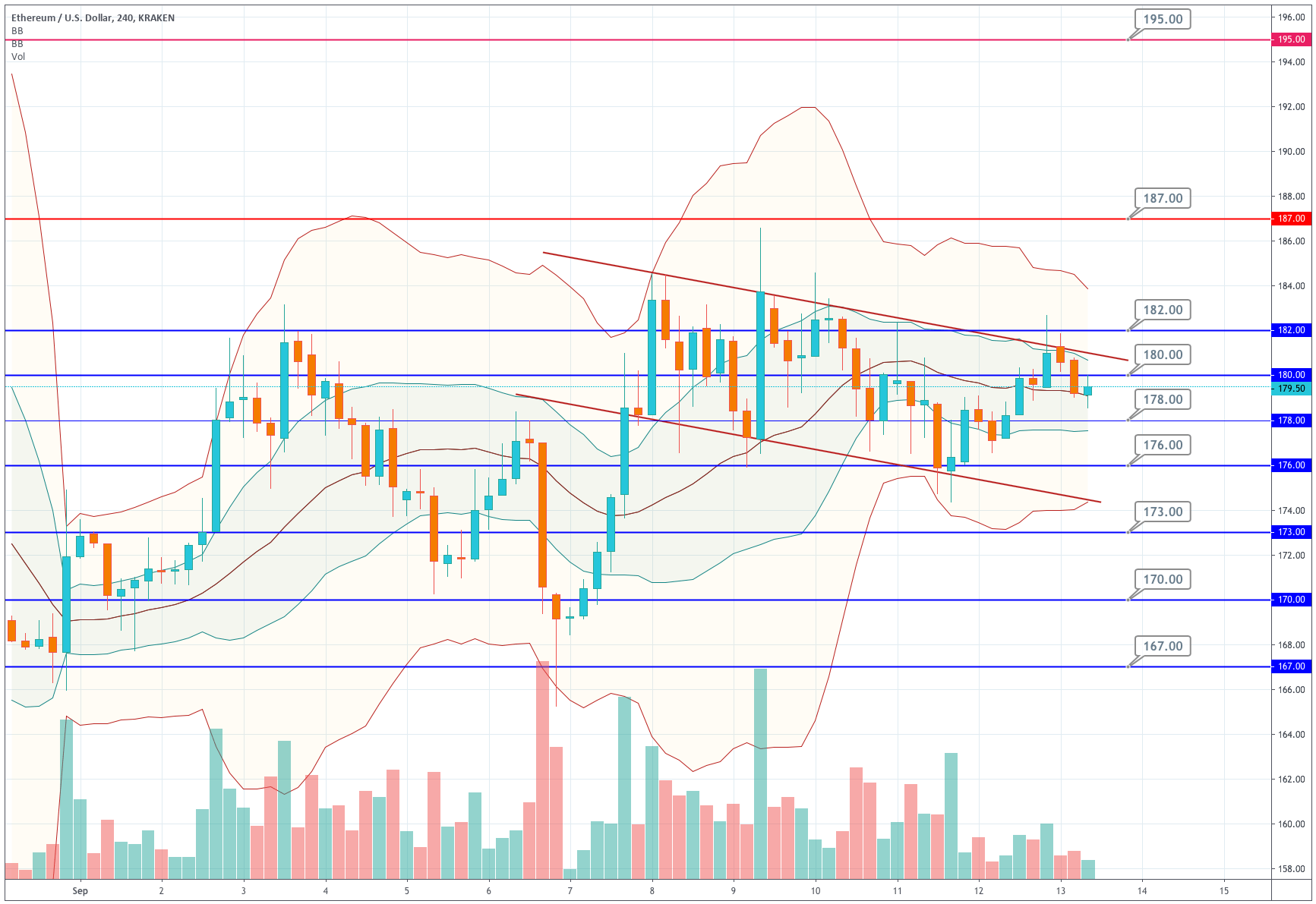 Ethereum’s latest rally was halted at the $182 level, thus creating a lower high. Now it appears as travelling inside a slightly descending channel. Currently, the price has retraced back to the mid-line of the Bollinger band, while the MACD is turning downwards. The volume is very low, and the downward pressure seems small. Therefore we see this movement still a small retracement to the primary impulse that started on September 7. A close above $182 would be positive for traders waiting to buy the asset. If that is the case, the next target seems to be $187. $ 178 seems to be the support level to hold. If pierced, we could see the price visiting the lower side of the channel. 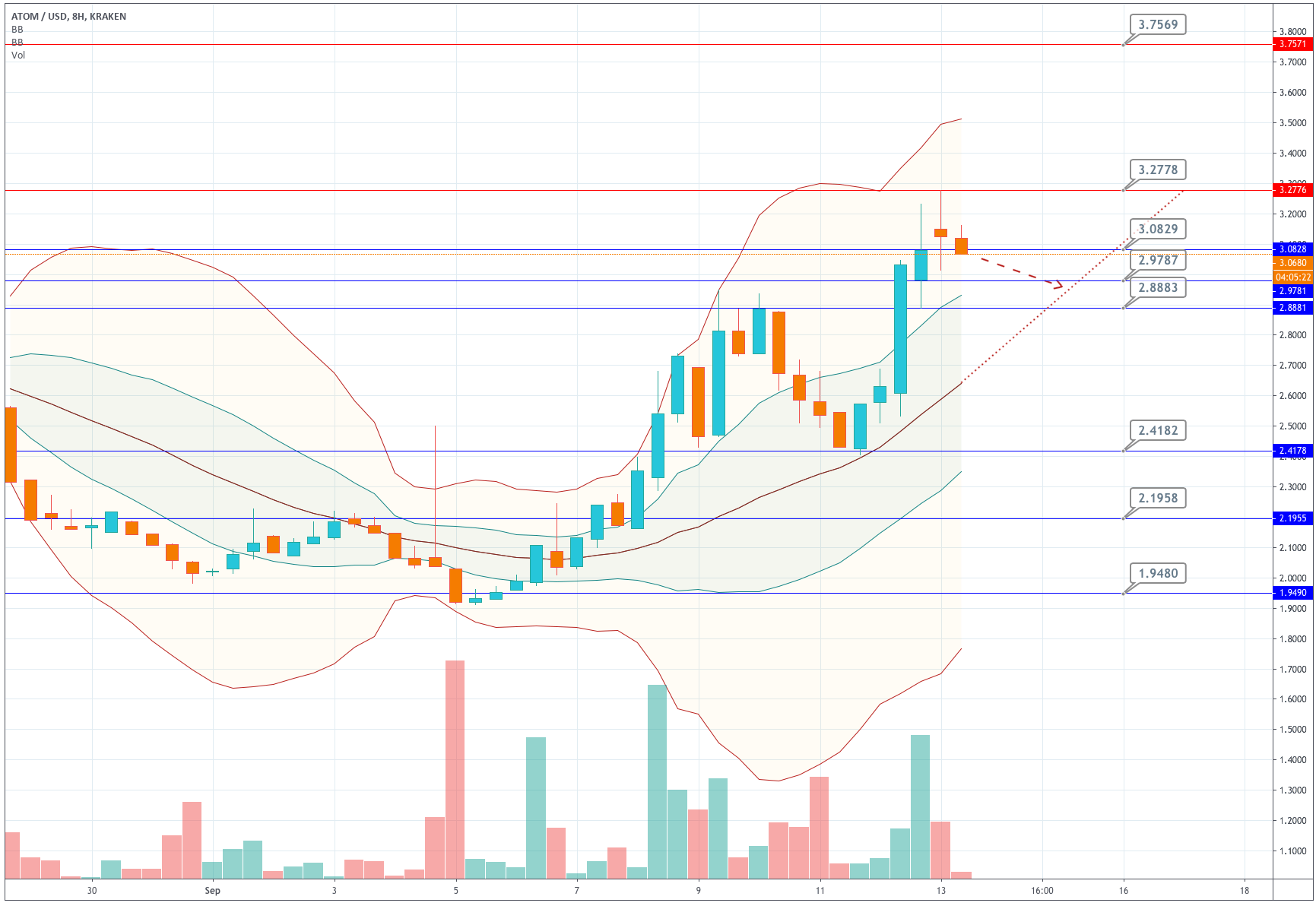 ATOM has been moving very bullish since September 5, on increased volume. We see that on the 8H chart the price moved to the upper Bollinger band and, after a top near $2.9 it backed to find support in the Bollinger mean line. Today it topped at $3.2778, and now the price went back a bit. It is likely the price would look again for support in the projection of the mean Bollinger line. 2.888 was the previous top, so many traders will jump there if the price retraces down to this level. The above chart shows the key levels to watch.

Warren Buffett Gave Away His Bitcoin From Justin Sun