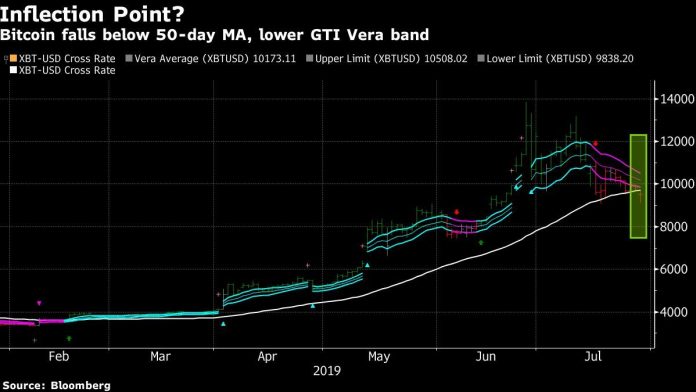 (Bloomberg) — Bitcoin may be closer to a turning point as cryptocurrencies struggle with greater scrutiny and bearish signs pile up.

Some technical indicators for the world’s largest digital coin have been pointing to further losses. It has broken below its 50-day moving average support, which could signal the end of a recent uptrend that brought it close to $14,000 at the end of June. Bitcoin has also fallen under the lower limit of the GTI Vera Band indicator, which measures up and down trends, and is trading around $9,575 as of 12:16 p.m. in New York.

Bitcoin “stands at a key technical juncture,” Matt Maley, equity strategist at Miller Tabak + Co., wrote in a recent note. Greater regulatory scrutiny “will become an even more prominent issue (much more prominent) once we move past the summer recess for Congress and into the meat of the 2020 election cycle.”

A spate of negative developments have sent cryptocurrencies lower this month, including fallout from Facebook Inc.’s plans to launch its own stablecoin called Libra. Lawmakers lambasted David Marcus, who leads the company’s blockchain team, during back-to-back Congressional testimonies earlier this month, citing trust and privacy issues, among other things. The social media giant’s crypto launch comes at an inopportune time: the U.S. Justice Department announced plans to scrutinize big tech platforms following criticism that some companies have become too big and too powerful.

“It’s a new product. It’s much different from most new products,” said JJ Kinahan, the chief market strategist at TD Ameritrade. “Everybody, including regulators, are trying to figure out the best way to roll this out to protect people, keep it something that’s viable but keep it from being the Wild West.”

And last week, the Internal Revenue Service warned more than 10,000 cryptocurrency holders that they may be subject to penalties for skirting taxes on their investments. Bitcoin has fallen about 20% this month. Peer coins have also retreated — Litecoin has dropped more than 25% in the same period, while Ether is down close to 32%.

–With assistance from Kenneth Sexton.

To contact the editors responsible for this story: Jeremy Herron at jherron8@bloomberg.net, Dave Liedtka, Rita Nazareth

For more articles like this, please visit us at bloomberg.com

BCH/USD a wipe-out of 2020 gains possible