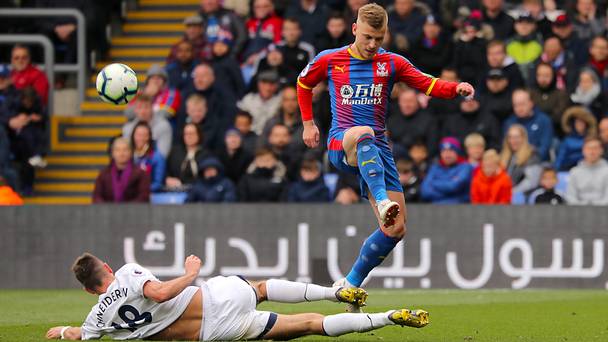 Crystal Palace manager Roy Hodgson has been left with mixed news on the injury front after Max Meyer was ruled out of Saturday’s trip to Manchester City but Joel Ward will be back in the squad.

German midfielder Meyer sustained an ankle injury during the 1-1 draw with Arsenal last weekend when Pierre-Emerick Aubameyang caught him late and was sent off.

He will be absent for the clash with Pep Guardiola’s side but right-back Ward is back training and available following a knee injury picked up at the end of November.

Boss Hodgson said: “We were hoping to recover Max Meyer but that’s not been possible, so we’re one further player down.

“But Joel Ward, who’s been missing for a long period, returns. Scott Dann of course returned before the last game.

It makes the meeting with Premier League champions City even more daunting despite winning there 3-2 last season.

Hodgson added: “We need to go there in full humility and to understand we will be confronted with a team which is one of the very best in Europe and quite capable of winning the Champions League.

“When I look at their bench and I compare it to what ours will look like, it will be a little bit frightening in terms of what they can do if they want to change the game.”

Yet the south London club have so far only managed to bring in Cenk Tosun on loan from Everton, with a move for Tottenham right-back Kyle Walker-Peters seemingly stalling.

“No update,” Hodgson replied when asked about the Spurs defender. “There was initial contact I think between the clubs and the suggestion was made and one I was behind.

“It would have been a good move for us I think, but as far as I know nothing is happening and I’m not sure what Tottenham’s intention with Kyle Walker-Peters is.”

The 72-year-old also rejected suggestions Benteke could leave on a loan deal to Bordeaux, or Schalke midfielder Nabil Bentaleb could join Palace this month.

Midfielder Victor Camarasa also saw his season-long loan at SE25 end early this week, with the Spaniard returning to Real Betis and signing for Alaves.

“Going into the window we were hoping for two strikers and full-back cover at right and left-back,” Hodgson explained.

“Potentially extra cover in midfield, maybe a different type of player to the player Victor is and someone who could take his place in the squad.

“We were looking to research those possibilities but nothing has happened so far other than the fact we have got Cenk on loan from Everton.”