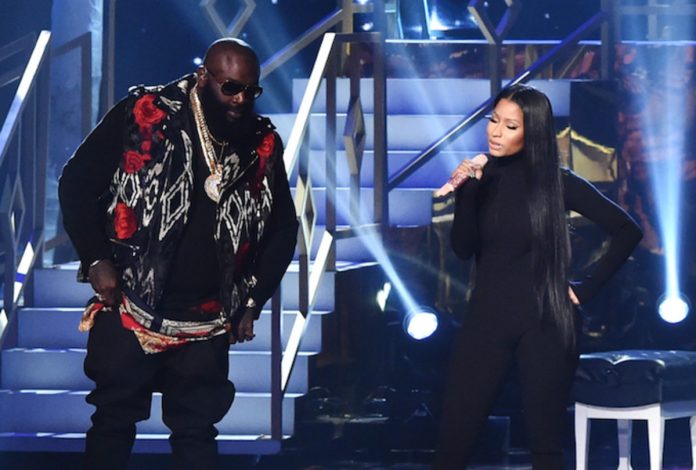 Back in 2017 Rick Ross referenced Nicki Minaj following her separation from Meek Mill on his song “Apple of My Eye.” “I told Meek I wouldn’t trust Nicki/Instead of beefin’ with your dog, you just give ’em some distance,” Rozay rapped. While he latter clarified that he had no issues with Minaj, it was hard not to see it as him throwing shade.

In her appearance on the Joe Budden Podcast, Nicki belatedly responded. “I went and sat down in a meeting with Obama, President Obama, and Ross was there,” she explained at the 36-minute mark of the podcast. “[He] texted dude after the meeting and said, ‘Yo, this chick is a keeper.’ I saw the text myself with my own eyes, ‘This chick is a keeper. She went in a room full of rappers and spoke to Obama and the first thing out of her mouth was about you and figuring out your probation situation.'”

She continued, “And then you come out on an album, when it’s time to sell some weak-ass fuckin’ album, and try to disrespect Nicki Minaj?”

Expressing her confusion, she also referenced how Ross has continued to take shots at 50 Cent, too. “And now you try to disrespect 50? Try to hope 50 would respond to your nonsense this time? Boy, sit your fat ass down.”

“I told Meek I wouldn’t trust Nicki,⁰Instead of beefin’ with your dog, you just give ’em some distance” pic.twitter.com/WGl0QMPkgW

Joe Budden applauded her. Listen to the full podcast below.

Apple has a Vladimir Putin problem