A new report this morning reveals that smartphone sales declined 7% year-on-year (YoY) and 23% quarter-on-quarter (QoQ) in Europe during Q1 2020 amid COVID-19 outbreak. The impact of the pandemic was relatively stronger for Western Europe, down 9% YoY, than for Eastern Europe, down 5% YoY. Apple remained resilient while Huawei declined sharply for the quarter – though this was more than COVID-related.

Peter Richardson, VP of Research: “Q1 is seasonally weak, but the coronavirus outbreak amplified this. The smartphone market decline was primarily due to COVID-19 outbreak across the region in the second half of the quarter. The biggest five markets in Europe entered lockdowns of varying severity at different points in March. Consequently, most of the offline stores were closed, though online remained open throughout. Also, the economic impact of the pandemic has led to lengthening replacement cycles as consumers withhold making discretionary purchases.”

The Counterpoint report further noted that “amid the COVID-19 outbreak, Italy was the worst affected of all European countries, driving the smartphone market to a 21% YoY decline.” Yesterday Patently Apple posted a report titled “Italy’s Contact Tracing App called ‘Immuni’ begins testing next week using Apple|Google Technology to reach most Smartphones.” Italy’s efforts should translate to a better smartphone market by the time Apple’s iPhone 12 launches later this year, unless a second wave of COVID-19 hits global markets.

The Counterpoint report added that in other European markets, some operators such as Vodafone, and retailers such as Dixons Carphone were able to adjust to the sharply higher online demand and somewhat offset the decline. Others however, like Mediamarkt/Saturn in Germany, had under-invested in digital channels and lost sales due to store closures.

Coronavirus did not officially make its presence felt in Russia until late March/early April and hence the market remained relatively resilient in Q1 2020, declining just 1% as noted in the chart below. 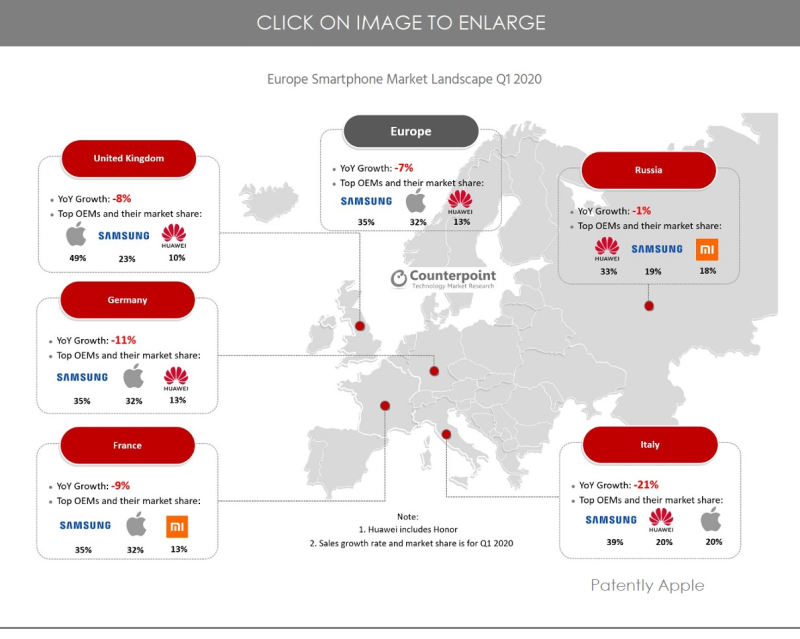 Abhilash Kumar, Research Analyst:  said, “Samsung continued to lead the chart for Q1 2020. This is driven by Samsung’s diversified portfolio across all price bands. Also, marketing campaigns around the Galaxy S20 launch boosted its overall sales. Unlike Chinese OEMs, Samsung had no supply issues and was not impacted by China lockdown worries.

Apple remained flat for the quarter and showed its resilience during the COVID-19 crisis. The iPhone 11 series continues to perform well, despite a lack of supply in some markets and some channels.

Huawei declined a sharp 43% YoY for the quarter as the US trade sanctions continue to bite. Xiaomi has been the biggest beneficiary from Huawei’s decline as it grew 145% YoY capturing 11% share in the quarter.” For more on this, read the full Counterpoint report here.

When looking at the European Chart, it would seem reasonable to forecast that Apple could return to leadership in at least Germany and France with the new iPhone SE that provides Apple with a clear-cut mid-market smartphone that is able to counter those from Samsung. Time will tell if that theory pans out.

Horse dies on North Carolina coast after choking on apple